GOD IS THE AUTHOR! 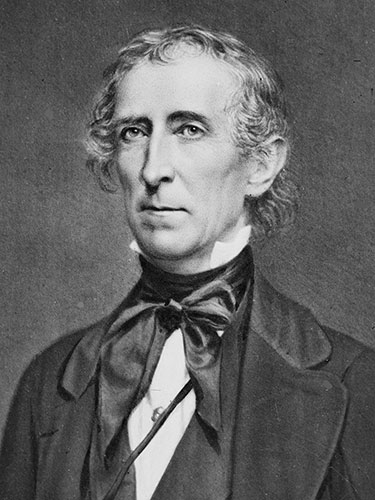 John Tyler became America’s 10th President 179 years ago.  He was born in 1790 and died in 1862.  Historians have never considered Tyler one of the brighter lights in America’s Presidential chandelier.  But there is something that might grab your attention.

Two of Tyler’s grandsons are still alive!  At first blush that seems impossible.

How can a man born in the 18th century and who died in the middle of the 19th century have living grandchildren two decades into the 21st century?  As you might guess, the dominoes of Tyler’s life had to fall just the right way.  And they did.

Tyler fathered 15 children.  His second wife Julia was 30 years younger than Tyler.  One of Tyler’s sons, Lyon Gardiner Tyler (1853-1935) the President’s 13th child when he was 75 married a woman 35 years old and they had three children.  Lyon Gardiner Tyler Jr. was born in 1924 and Harrison Ruffin Tyler was born in 1928 and both are still with us.  They are the living grandsons of the 10th President of the United States.

When you think about it, some pretty incredible things had to happen for you and me to be here today.  Our grandparents had to make it out of childhood alive, something not guaranteed 100 to 130 years ago.  Those who came before you had to survive the Flu Pandemic of 1918, the scourge of Polio and the possibility of becoming a casualty of one of America’s great wars.

Against all odds, you had to win the most important competitive battle of your life.  The one which half your genetic material outraced at least 10 million other sperm.  Your mother had to decide to bring you into the world and care for you when you were sick, love you and feed you.  All those things had to happen.  And they did!

The Hebrew Psalmists were pretty sure there was more to the story.  “In Your Book O Lord were written all the days that were formed for me when none of them yet existed”  (Psalm 139:16)

God, in other words is the ultimate author of our stories.  God is the superintendent of the details of our lives both big and small.  “I know the plans I have for you” says the Lord  (Jeremiah 29:11)

Those plans may not include grandchildren who may carry on your legacy two centuries from now.  But they are remarkable enough to give every one of us the grounds to say every morning:  “Thank you, Father, for the privilege of waking up one more time in your good creation.”