A bank of fog can be intimidating. Familiar landmarks seem to vanish. Progress slows. We may even seem to lose our way.

The science of fog is well known when super-saturated warm air hovers over cooler ground water vapor that precipitates into small droplets of condensation. Those droplets are suspended into the air via the same process that forms clouds. Fog is essentially a cloud in close contact with the earth’s surface.

Fog may seem to be little more than a mist but it contains a serious amount of liquid. A cubic mile of dense fog can hold up to 56,000 gallons of water which weighs about 225 tons. That’s a lot of water!

This is all very interesting of course, but most people tend to respond more emotionally than academically to the presence of fog. That’s why it’s featured in so many scary movies which is precisely how most of us feel when emotional spiritual fog seems to settle over our lives.

We don’t know what to do. We’re not sure how to go forward. The one thing we do know is that we now have two choices. We can worry or we can pray. Somebody is in charge of what’s happening to me. Either I’m in charge (in which case I have a lot of worrying to do) or God’s in charge.

Worry is a conversation I have with myself. “How did I get into this mess?” “What am I going to do now?”

Prayer is a conversation I have with God. “Lord, I can’t see you and I can’t see more than a few steps ahead. “What do you want me to do next?”

I feel fogged in. I don’t know how I am going to make it through the next 24 hours let alone this COVID-19 crisis. But I’m so glad you’re in charge.

It is also worth knowing something else. Fog is no match for the sun. Even though it’s often declared that sunlight has the power to “burn off” a thick morning fog, it’s more accurate to say that when the sun-heated air and ground become sufficiently warm, the droplets simply evaporate. They vanish literally into thin air.

That brings to mind a vivid image presented by one of the Hebrew prophets: “But to you who revere The Lord’s name, the sun of righteousness will rise with healing in its wings.” (Malachi 4:2)

We may think we’re facing a 225 ton tsunami, a giant wave that is threatening to break over us. But the sunshine of God’s healing, love and grace always shines through, revealing our worries to be the imposters they truly are. 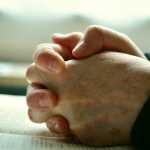 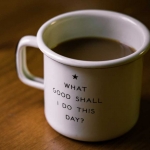