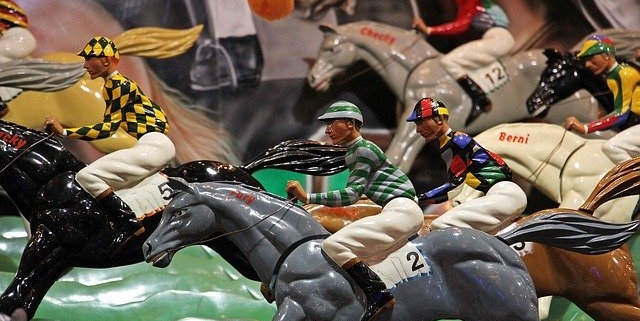 On a wintry morning in 1956 a riding instructor named Harry de Leyer drove from his farm in Long Island four hours to Pennsylvania to a horse auction. Every Monday as many as 300 horses were auctioned at this auction. Harry had hoped to purchase a gentle horse that could become a training horse for his students.

The auction attracted a plethora of horses. Some of the horses were purebreds. They fetched the big bucks. Some were animals that needed to be trained. Others simply needed to be loved. By mid-day the auction would be over and every horse would be sold.

The last bidder was always the Kill Buyer. He would pay bottom dollar for animals no one wanted. They would be crowded into a truck and sent to the slaughterhouse where they would become pet food or boiled into glue.

On his way to Pennsylvania, Harry’s old car struggled through the snow and blew a tire. By the time he arrived the auction was over. The only horses left were being loaded into the truck to head for the slaughterhouse.

Harry still hoped his long ride was not in vain. Maybe there was a horse he could find in the Kill Truck. The driver was in a hurry but Harry was drawn to an underfed, overworked plow horse covered with mud and manure. He was a grey horse with kind eyes but was missing a shoe, had cuts on his knee and he had been rubbed on his back by a harness.

How much for the grey horse in your truck? “$80 and he’s yours,” said the Kill Truck driver.

When the neglected horse arrived at the de Leyer farm, Harry was captivated by the grey coat against the background of falling snow. He looked like a snowman and Snowman became his name.

Snowman proved to be gentle, especially around children. But he wouldn’t stay in the fence. He jumped numerous fences. Even after building a high fence they thought could corral Snowman, he proved he was capable of real talent for jumping. Gradually, it dawned on the Dutch horse trainer that this might be an extraordinary animal. The horse never again left Harry’s side. He began to train him for jumper events.

People laughed out loud when the old grey plow horse walked alongside the best of the best at the Open Jump Championships in 1958-just two years from being rescued from the Kill Truck. He was named the American Horse Jump Association Horse of the Year in both 1958 and 1959.

Snowman became a celebrity. He was featured in Life Magazine and was on The Tonight Show with Jonny Carson. Along the way he never lost his love for children.

Who knew that for a mere $80 Harry de Leyer had rescued one of the greatest jumpers in equestrian history?

In a similar way God has rescued us from the slaughterhouse. The Apostle Paul minces no words: “God rescued us from the dominion of darkness and transferred us to the Kingdom of His beloved Son, in whom we have redemption of sin.”
(Colossians 1:13-14)

Many of us are put off by the notion we need to be rescued. But once we have spent some time living under God’s leadership, our lives reflect hope instead of cynicism, grace instead of exasperation, and peace instead of trying to control everything-only then will we grasp the understanding that when God looked at us covered with spiritual mud and scars He didn’t turn us away.

Instead, He saw in us what we were always meant to be: Champions.