According to Greek legend it took the hero Odysseus 10 years to reach home by journeying the Mediterranean Sea after the Trojan War. But that’s nothing. So far an armada of plastic toys has been at sea for 29 years. And some of them have gone halfway around the world.

The great Plastic Duck Odyssey began on January 19, 1992 when a Pacific storm slammed the container ship Ever Laurel somewhere near the International Date Line. The ship was journeying from Hong Kong to Tacoma, Washington where it was scheduled to deliver, among other things, thousands of bathtub toys.

The storm sent a dozen containers overboard. One of them split open and spilled 28,000 yellow ducks, blue turtles and red beavers. Those durable, watertight plastic creatures, collectively called “Friendly Floaters” were intended to delight American children at bath time. Instead they have become playful international symbols of the object of careful scientific scrutiny.

It appears that approximately 18,000 of the toys went south, where they washed up on the shores of Australia, Indonesia and South America. The other 11,000 or so have taken a northern route washing up in Alaska and British Columbia. Others rode the big surf in Hawaii. Some of the ducks, turtles and frogs-on their way to Cape Cod and the coast of Maine-drifted over the spot where Titanic sank in1912. Still others caught by the Gulf Stream have begun to turn up in Scotland and England-17,000 miles from the point where their Pacific bath began.

Along the way, it dawned on oceanographer Curtis Ebbesmeyer-looking for something interesting to do in his retirement-to track ocean currents. Even after centuries of human adventure on the seas, scientists knew next to nothing about the oceanic “rivers” of warm and cold water that circulate from continent to continent.

Ebbesmeyer, with the help of people around the world who are faithfully reporting yellow ducks and red beaver sightings, is beginning to fill in gaps in our knowledge.

Here’s one thing we know already: Things that are sent adrift on the ocean don’t stay in the same place very long.

Never was a truer word spoken about the words we speak.

Whenever we open our mouths, it’s as if we are emptying an industrial container. Our words go everywhere. And after we have spoken we have no way of retrieving our subtle digs, our exaggerations, our judgments and our snarky commentaries. Just ask anyone who has ever been a marriage partner, a business associate or a friend. Some of the most regrettable comments are still washing up on distant shores 20 years later.

THE WORDS WE SPEAK HAVE THE CAPACITY TO CHANGE REALITY.

Something actually happens when we speak. Your words still seem to be “out there” somewhere endlessly rolling on the tide.

The Apostle James marveled at the tongue’s capacity both to heal and to harm. With our tongues we bless God our Father; with the same tongues we curse the very men and women he made in his image. “A spring doesn’t gush fresh water one day and brackish the next, does it?” (James 3:10-11)

Starting today we can bless others. That will no doubt include speaking less and listening carefully. And refusing above all, not to go negative.

“Let us therefore encourage one another and build each other up.” (I Thessalonians 5:11) By God’s grace, such words of blessing can ride the currents and still will be washing up on shores for years to come. 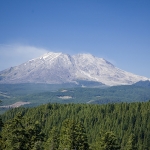