Years ago, at the Christmas Eve service where I was preaching, there was an unexpected
visitor.  Just as I was diving into my opening paragraph, a rather large spider-big enough to be
seen from the back of the sanctuary-lowered itself from the ceiling on a thread and dangled just
a few feet from the left side of my head.

Incredibly, I never saw it.

I was feeling encouraged about the sermon because people genuinely seemed to be paying
attention.  Actually, as I learned later, they were transfixed by the spider.

I like to walk around sometimes when I preach.  What would happen if I turned left and walked
right into it?  People were waiting breathlessly.  Not one of my so-called friends chose to alert
me to our guest.  Several children even named the spider:  Charlotte, of course.

Just before the sermon ended, the spider apparently concluded I was finally going to wrap
things up.  It zinged back up to the ceiling and was never seen again.  At the door following the
service, no one was talking about my beautifully crafted message.  Everyone was talking about
the spider.  I did not see it.

How is it that hundreds of people know that a spider was dangling from the ceiling, whereas I,
the person who was closest to it, didn’t see it at all?  It was simply a matter of degrees.  If I had
turned just five more degrees, I would have seen everything.

That’s a little bit like God.  God often hides in plain sight-only a few degrees from our line of
vision.  The frustration of knowing a little something about God, but definitely not everything, is
on display in the opening story of the Gospel of Luke.  Before Luke describes the birth of
Jesus, he introduces his readers to an elderly couple named Elizabeth and Zechariah, who is a
priest.  They genuinely love God.  “Both were righteous in the sight of God, observing all the
Lord’s commands and decrees blamelessly.” (Luke 1:6)

But they were childless because Elizabeth was not able to conceive, and they were both very
old.  In a culture that regards offspring as the chief sign of God’s blessing, Zechariah and
Elizabeth feel unblessed.  Their dreams of starting a family are dead.  Then something
amazing happens.  Zechariah is stunned by the sudden appearance of an angel of the Lord
who informs him that at long last he is going to become a dad.  Zechariah literally can’t believe
it.

“How will I KNOW that this is so?” he asks the angel.  Zechariah is exactly like us.  He isn’t
visited by angels every day.  He simply wants to KNOW:  Is God in the middle of this, even
though I can’t see it?

But we rarely know what God is up to, even when it is happening.  God asks us to trust him-this
God who is just a few degrees out of sight.

For Zechariah and Elizabeth, everything changes.  They become parents of a little boy who will
grow up to be John the Baptist, Jesus’ cousin and ministry forerunner.

And how about us?  The God who hides in plain sight speaks through small events we might
not otherwise recognize:  a phone call that catches us off guard; a new friend we come to know
here at Westminster Village; a sentence in a book that causes us to hope again.  God, where
are you?  Why can’t I KNOW what you’re doing?  That is the cry of the human heart.
But God is not deaf to our cries.  And Christmas is our reminder God is not far away. 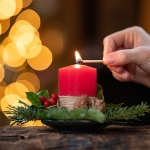 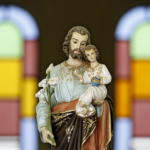