“Praise God From Whom All Blessings Flow”

When people respond to God’s call to ministry, they may inevitably wonder where they’ll be led to serve.

Thomas Ken, born just outside London in 1637, couldn’t have imagined he would one day become Chaplain to the King of England. And that he would consider it the most thankless job in Christendom.

King Charles II was not what one would call a paragon of spiritual virtue. It’s not for nothing he became known as England’s Merry Monarch. Charles fathered 14 children by means of at least seven mistresses. His favorite paramour-whom he identified as his official mistress-was pretty, witty Nell Gwynne. When the King suggested that Ken move out of his Chaplain’s residence so she could move in, the clergyman had had enough.

In an era in which saying “no” to royalty could amount to terminal vocational choice, Ken stood up to the King. The King backed down. Sometime later, when the King needed to appoint a new Bishop, he remembered his Chaplain. “Where is the good man who refused his lodging to poor Nell?”

Becoming a Bishop, however, didn’t protect Thomas Ken for long. When James II rose to the English throne in a few years later, theological sparks flew. For speaking his mind, Ken was charged with “high misdemeanor” and imprisoned in The Tower of London. Fortunately, he was acquitted before ending up on the chopping block.

Having stood up to the next monarch as well-King William of “William and Mary”-Ken finally retired in his 70’s to enjoy several years of quiet contemplation in the English countryside.

Looking back over his eventful life, Ken can be forgiven for not realizing that, unintentionally, he had written what would become the most widely-sung lyric in church history. It happened early in his ministry, when he was Chaplain at Westminster College–a school for young men.

English church music in the 17th century obeyed an absolute rule: tunes could vary, but only words permitted in congregational singing had to come more from the Old Testament psalms. Hoping to encourage the devotional habits of his students, Ken composed three short hymns-one to sing at breakfast, one at bedtime, and one to sing at midnight in case a student was staring sleeplessly at the ceiling.

Since none of the hymns lyrics were taken from the psalms, Ken encouraged the boys to sing them only in their rooms, The words have become familiar to millions:

Those four simple lines have become known as the Doxology (from the Greek word doxa, “glory”, and logia, “saying”). They are a declaration of God’s Glory, an expression of praise for the tri-personal God. When God’s Spirit leads us along unexpected and difficult paths, we can always be sure of one thing:

His blessings, even when we don’t see them at first, will always be flowing. 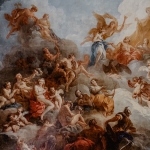 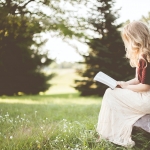