Those are words that a driven, task-obsessed person can never imagine saying. “It is finished” would mean there would be nothing left to check off the list of things to do. No more sweaters to arrange according to color and style. Every conceivable thank-you note written. Nothing left to haul off to Goodwill from the attic or the garage.

But Jesus was not a driven, task-obsessed person. As he died on the cross, there were a myriad of unfinished tasks on the face of the earth. But one task was complete. IT was finished. The priority work had been accomplished-something he declares in John 19:30.

One Bible commentator has generated a list of 50 different spiritual victories that were attained at the moment of Jesus’ death. It’s enough to agree, however, that what was finished was Jesus’ life, his ministry on earth, and the suffering cocooned in his final hours. And it’s just as accurate to say that as Jesus’ limp body was being wrapped in linen, only to rise from the dead later in the weekend, something else was just beginning. His finished work was launching 20 centuries of additional work that Jesus would now endeavor to accomplish–to bring to completion–through US.

It’s worth noting that Jesus did not say, “I am finished”-the resignation of a dying man or someone playing the victim card. Jesus chose to endure the cross for the specific purpose of answering his Father’s call to die as the Lamb of God for the sake of the world.

A few years ago my wife and I were eating at a local restaurant here in Muncie when the server informed us there was no bill to pay. “You know that man sitting right over there until a few minutes ago?” he said. He paid your bill. You’re free to leave whenever you want. Payback was never the reward he was seeking. The reward-for both of us-has been the deepening of our relationship.

A meal is a real need. But it’s just a momentary one. Jesus paid the bill that addressed our greatest ongoing need in this world and the next. Those three English words: “It is finished”, translate just one Greek word from John’s text: Tetelestai. It’s a marketplace term from the ancient world that means “paid in full.” The debt has been erased. No further action is required. That’s the work that Jesus declared finished while breathing his last. What he seeks is the establishment and deepening of an eternal relationship with every one of us.

We can imagine an anxious spiritual seeker gripped by his need to enter a relationship with God asking, “What do I need to make this happen?” He would be told, “Someone has already done it for you. It’s finished.”

We’re not talking about banishing the word DO from our spiritual vocabulary. There is so much to do for God’s sake every day of our lives. But all that we DO must flow from what Jesus has already DONE. And we can awaken every morning even those days in which it feels as if we have a hundred things to do-knowing that Someone has already finished the most important task in the cosmos. 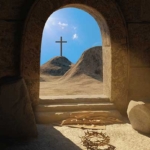