“Easter: Your Story Isn’t Over Either”

It’s possible that the two most poignant words in the Bible appear in Mark’s account of the resurrection. Early on Sunday morning, a group of women have come to prepare to put spices on Jesus’ body. In a Jewish tradition, it’s the thing to do. Jesus was buried so quickly the previous Friday that they had missed the opportunity to provide the final kindness.

Their chief concern was a practical one: How are we going to get inside the tomb? A heavy stone stands between them and Jesus.

As the tomb comes into view, they immediately begin to come to terms with three things that in a million lifetimes they never expected to see:

The stone had been pushed aside.
Jesus’s body had vanished.
An angel is sitting there in plain sight.

The angel says what almost every angel says in biblical encounters: “Don’t be afraid. You are looking for Jesus of Nazareth, who was crucified, He has risen.”

While the women attempt to process this cosmos-shifting news, the angel adds an important job assignment: “Go tell his disciples and Peter, He is going ahead of you into Galilee. There you will see him, just as he told you.” (Mark 16:9)

“Go tell his disciples”- that would be the 11 remaining apprentices of Jesus, since Judas is now out of the picture-“and Peter…” And those words are almost enough to make us cry. Peter was obviously one of the disciples. So why the special invitation? No one in the world that morning needed a word of reassurance more than Peter. No one stood in greater need of a personal invitation to meet the risen Christ than the guy who had crashed and burned in the most dramatic way possible.

Peter had promised so much: “Lord even if everybody else turns tail and runs, you can count on me.” Then in short order, he had said aloud three times that he and Jesus had never even crossed paths. The very man whom Jesus had said would be the Rock on which he would build his church had crumbled like a sandcastle on the beach when hit by the first wave.

The words “and Peter” only appear in the Gospel of Mark. According to a well-founded tradition, Mark had been the amanuensis or personal secretary of Peter during his later years of ministry. His Gospel is quite likely a “Peter’s-eye-view” of Jesus’ life and death. It’s possible that Peter alone remembered that small detail of the angel’s message to the women at the empty tomb. For him, those words changed everything.

And Peter. You’re still one of the disciples. You’re still invited. Good Friday wasn’t the last chapter of your story. Your story isn’t over yet either.

Even if we cannot imagine recovering from the messes we have made of our lives, we’re still on God’s invitation list. He is, after all, in the business of raising the dead.

May you be filled this day with the hope and joy of Easter. 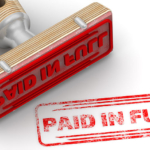